This arrived in it’s own display box, with other items in a larger box.

So, regular readers of my reviews will know that Tech isn’t really my forte but by blood, sweat and lots of tears I’ve learned the basics ( and a good few swear words along the way). So I wasn’t surprised when on opening this and not finding any instructions I was stumped as to what to do. Luckily that was Sunday and grandson number one was visiting- at 17 he’s like most his age, a few keystrokes, a wave of the hand, abracadabra and that’s it – done! ( Ok, the last two weren’t accurate but that’s how it feels !!) So when he shook his head and said no idea what to do, after turning it over and over we were stuck.

Next day I got it out again – I hate being beaten by an inanimate object, and then noticed instruction were on the side of the box. Sadly as you can see some bright spark had covered them with a very sticky label. I peeled it off very carefully so as not to tear text below, to reveal instructions for finding an App and did that.( search for Googo if you have the same prob)

Once that was done the rest was relatively easy, followed steps for passwords, wifi log in etc.  and I could view everything the camera saw on my phone pretty clearly. Couldn’t take pics or do videos though – well, I did but they were both a simple black monotone blobs – 1.4 mins of black playing happily on my phone….. and I’ve no idea why. while I was watching though I could hear through my phone the TV very clearly so the sound function is good too.

I think those more used to tech stuff would find this easy to use, but for me it was a bit difficult and I expect it can do far more than I’ve done with it. I eventually took the app off my phone as it kept updating or something during night, driving me nuts with auto update noises….Again someone who knows what they’re doing could sort that but sadly not me!

Useful for all sorts of issues though I’m not so sure about this one “small range troops battlefield alert” I know the UK defence budget has been cut but that seems extreme!

Stars: Four, good for those with some tech knowledge, usable if you haven’t but may try your patience! 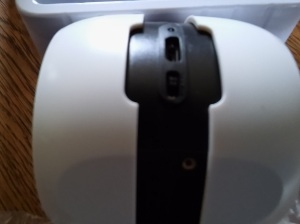 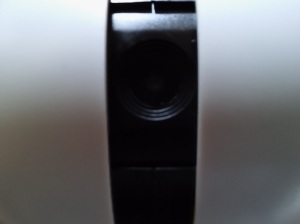 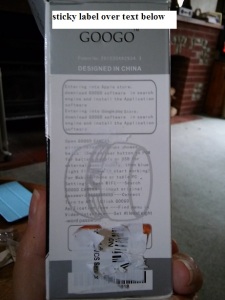 This arrived in it’s own display box, with other items in a larger box. I’ve had a few of these sets for review and they each have small differences. These feel very high quality, not cheap and flimsy, and are attractive to look at, being a simple, neutral black. Bright ones suit some people, others want something like this, more discreet.. They come in a useful, zipped fabric case, which will provide excellent protection when not being used, and makes them a very attractive gift.The description describes them as sweat proof and durable, so I would imagine they are fine in light showers, though that’s not been tested.

I found these very comfortable, easy to wear and that they stayed in situ whilst using them. Really annoying I’d imagine if they keep sliding out when out running or biking. They have a clip to attach to t-shirt or similar so that if in the unlikely event they do fall off they won’t get lost, and of course just slip them off if you happen to meet a friend and need to chat.

I found them very easy to connect. I followed the instructions given and they quickly paired to my phone, LG Spirit. It’s useful too that they can be used for other Bluetooth laptops. Multi use items are always welcome. They’re easy to charge via the cable supplied, simply click open the plastic tag on the earphones and attach the mini usb to the headset and the other end to pc or a phone/kindle charger. They have a decent battery life too, so should be fine for a full working day.

Functionally the music is reasonably clear, and it revives calls very well. I tried a couple of favourites via my phone and tried out the call function using another phone. Its useful with this sort being able to use them whilst wearing ear defenders as they fit inside, and that really useful when doing monotonous work such as lawn mowing!!

What’s not so great is the way the earpiece flashes when in use and the controls being on the earpiece. Most seem t be like this though, but I’ve had a couple where controls are on a neck cord attached to earphones, and that’s far easier, and less odd that poking away at ear trying to press right section…… 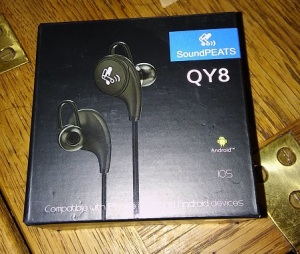 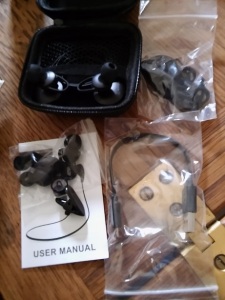 This arrived in it’s own display box, with other items in a larger box. Its a simple silicon mat, with some measurements round edges, and some circles sized in centre.

For rolling pastry I usually use a marble slab but tried it with this and it was fine, and if I needed pastry certain size the measurements would be a great help. Where it comes into its own though is as a baking sheet. Placed on a standard baking tin it provides an excellent non stick surface.

Chips, pies, wedges, fish fingers etc are all a breeze and it wipes clean easily. I did some sausages in oven when family visited recently, and usually I use tinfoil but the fat still creeps under and caramelizes on my roasting tin, takes forever getting it off but this stopped it. Its big enough that I used a slightly smaller tin so edges lifted preventing anything from getting under, and its thick enough that it doesn’t/won’t split easily. I guess if you’re careless and use a knife you could damage it – and I’ve done that cutting things on the thinner sheets I’ve bought from supermarkets, but this is much more robust. Still, I’ll keep knives away!!

Cleaning is a breeze, wipe over for most stuff though its flexible enough to go in washing up bowl, and I needed to soak it for a bit after the sausages, as there were a few crispy bits stuck, but ten minutes soak and they came off. Its dishwasher safe for those who have one – we don’t….

Its great for baking, from rolling to actual cooking, but I would like to have seen a band or something to keep it rilled up for storage. In the drawer it keeps unravelling, so I’ve resorted to an elastic band. 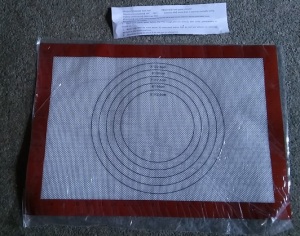 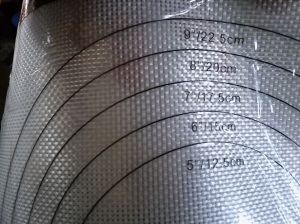