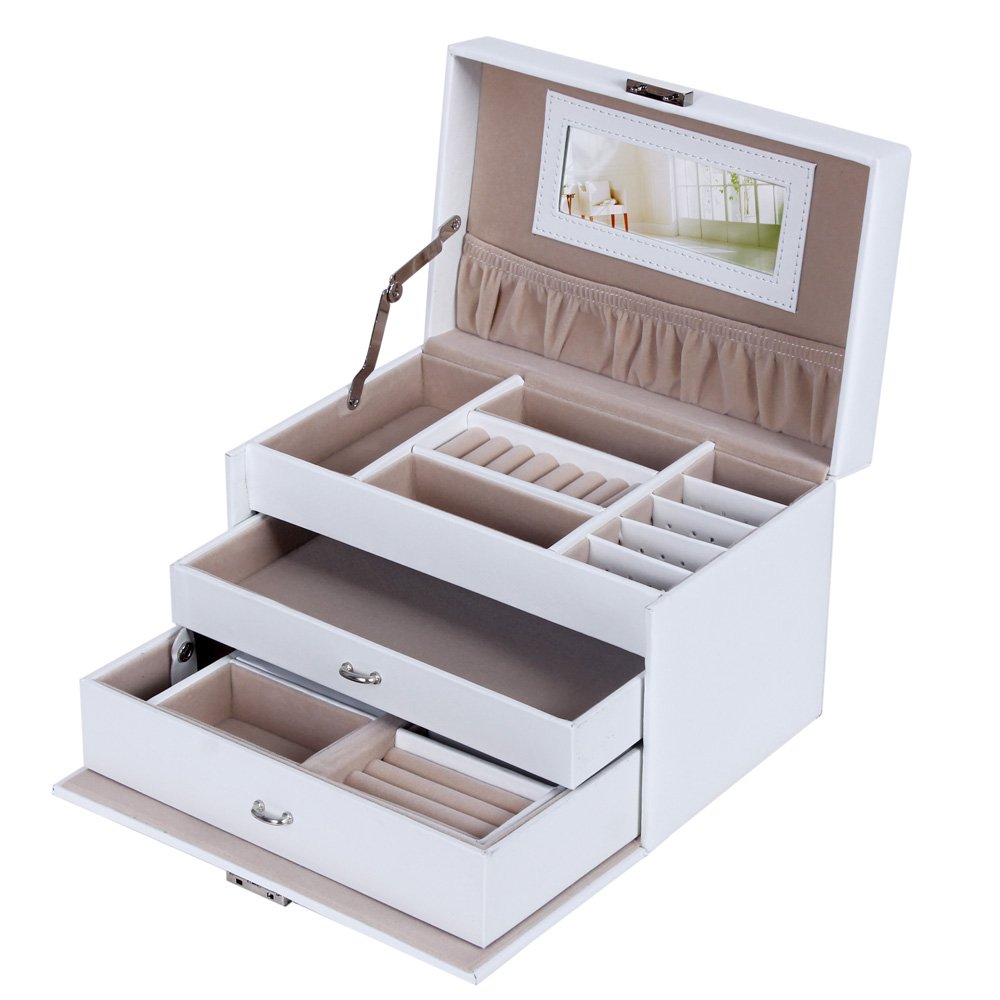 This box is much larger than I expected, giving plenty of room to store all your jewellery, and hopefully stopping you from doing what I do, taking it off and leaving it in odd places….Having it stored properly makes it easier to find when you next want to wear something instead of foraging through random drawers around the home. Although this shows the box in white I have it in a black version – maybe that will be on sale again soon.

Its really attractive in a soft leather effect, slightly padded outer with a beige, velvet feel inner. Its in three layers, with separate compartments and pouches for storing items without them tangling or rubbing together and getting scratched. The lowest drawer contains a small case that can be taken out and used for traveling, handy for taking just a few items and so easy to tuck into a weekend bag. there’s a lock…of sorts 🙂 it’ll stop it getting accidently opened but security?Really?  Anyone serious would just break the case or take the whole thing…might stop the kids from getting to anything precious though!

Its a great value case, with storage that’s been well thought out and will store properly everything most people have in the way of jewellery.

Stars: Five, a perfect case for keeping things in one place. 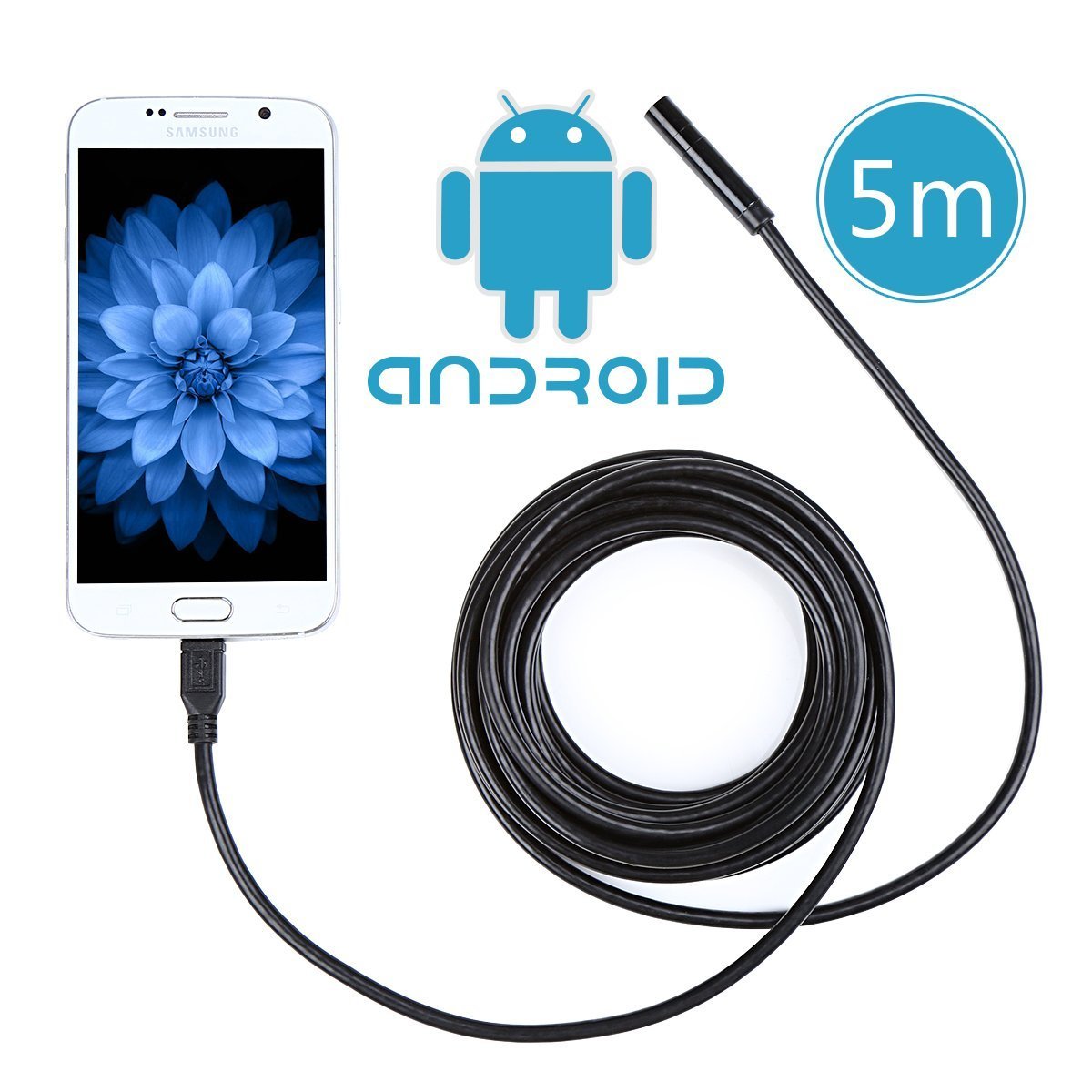 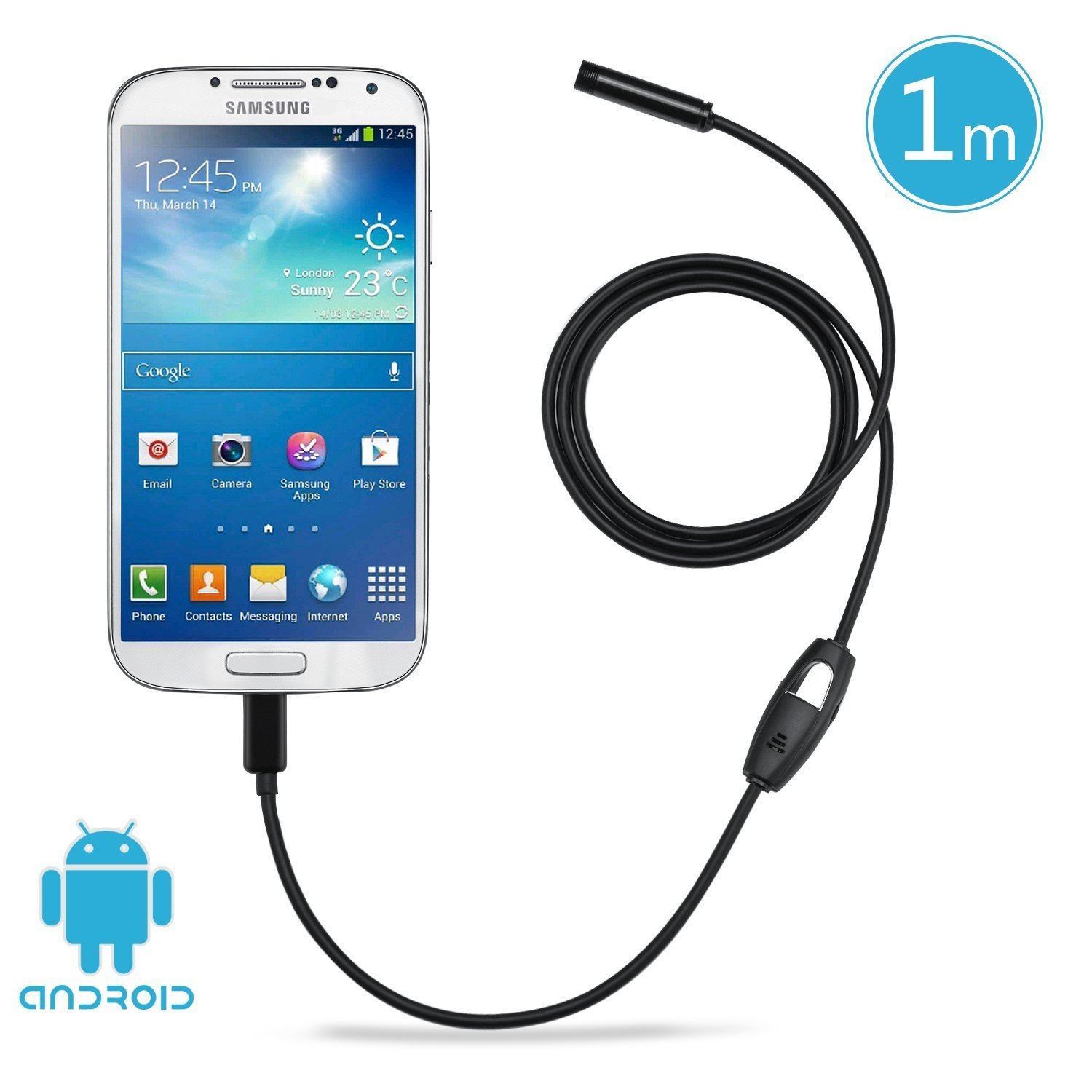 Co-incidentally I was offered two of these in one week, so I’ve tested them both together. There’s very little difference except that one has a much longer cable, useful if you’re inspecting drains or something.

So, the family sniggered when I told them I’d got two endoscopes for review. Daz ( 17 ) asked “What’s that?” and I told him what they use if for medically – its a gran’s place to gross out the grandkids sometimes 🙂 He got a bit pale though, announced he didn’t want something down his throat that had been up someone else posterior! In vain we explained they’d keep separate ones, and anyway everything is sterilised….he just kept say “yes, but how do you know they’ve not been mixed up” Good Point really! Then we all sniggered and descended into ideas about DIY medical short cuts.

Still, on to how it works. Pretty simple in the case of the PC. simply attach the USB end and plug in, switch on, open up Camera file on pc and there it is. You can adjust the lighting by way of a wheel on the cable from dim to very bright. We had fun looking in each others mouths – no we didn’t do the other end….Images were very clear and amazing how we could see such detail inside. Poked it in my ear and could see inside really easily, also in a drawer than was opened just a tiny bit. You can take stills or videos too though we didn’t try that.

What I really wanted though was to connect to my phone so the kids could see down in the lower depths of our pond, where we’ve frogs, snails, newts and all kinds of pond life. I thought it would be really fun but sadly despite Daz trying, me trying, son number two who knows most things about phones as he sells them trying,  none of us could get it to connect. My phone is three months old ( LG Spirit), his ( Sony Z series) a little older but not much and an online search told me OTG stand for On The Go, and that most phones within the last two years have it. I didn’t know how to get the QR code reading app, a quick lesson and and we did that and scanned the code, but still with both phones when we tried to run the programme and use the endoscope it just crashed. Multiple times.

As a tech phobic I’d assumed this was just a plug in and go item, and for the PC that’s true but for what I really wanted, the phone, we had to give up in the end as a fail and of course I can’t really drag the pc down to the ponds, thus my rating is three star. Five for the PC usage, one for the phone 😦

Stars: Three, great for PC, not so great for phone use.