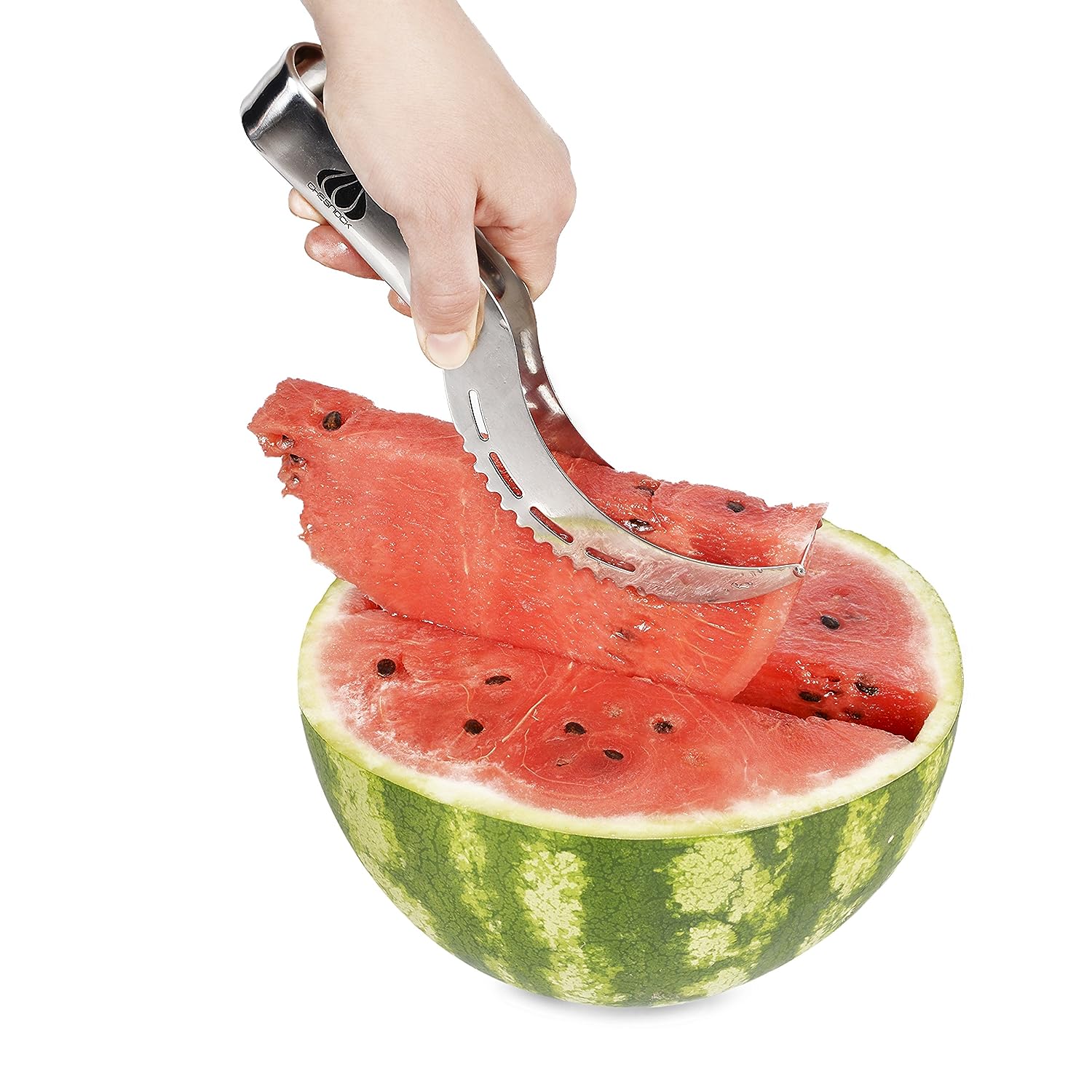 Well, the grandkids and I love watermelon so this caught my eye. Cutting them is usually a messy, sticky job and anything that makes it easier is a win. Having seen other reviews praising it I must be doing something wrong though because all I can get is shapes with jagged edges, that look like dinosaurs or something…

Its easy to clean,being made of  hypoallergenic stainless steel, all that’s needed is a quick rinse. It looks as if using it would be so easy but I found it hard to grip – despite the “non slip” handles. I do have arthritis in my hands though that make gripping difficult, so its possible that’s just an issue for those like me. My daughter didn’t have problems holding it, but she too found getting proper slices hard to do.

In principle I can see how it should work, and it seems so simple, but in practice its a lot harder than you think. I had a smoothie maker on trial at the same time and this was great for getting out the last bits of fruit for that. Unless you eat a lot of watermelon and are prepared to practice it’s an expensive tool. I’m back to cutting wedges with a sharp knife.

I think with practice it would work but its not the quick easy solution I’d hoped for, and I suspect it’ll be one of those gadgets left gathering dust..along with the battery operated ice-cream maker and the espresso coffee machine/milk steamer! 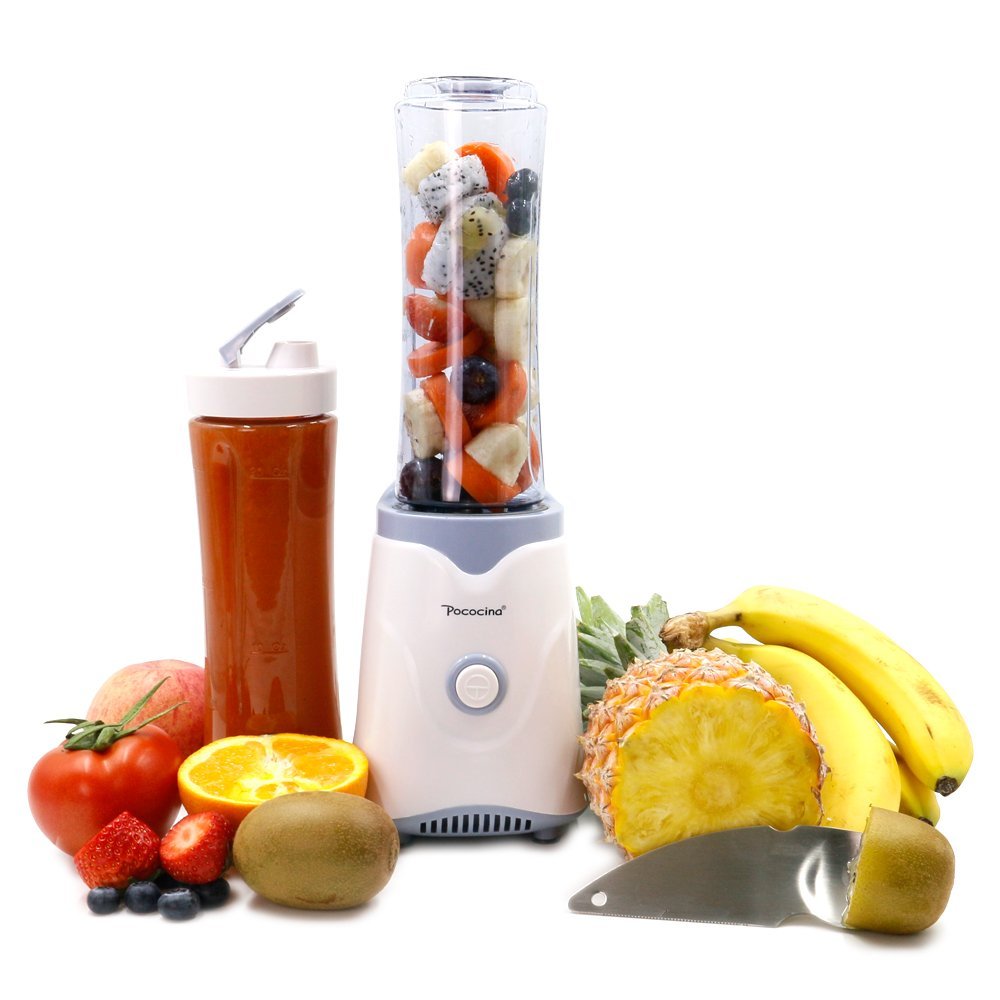 Back in the seventies most homes had something like this – called a blender back then and used for soups, sauces and pureeing baby food…now its a “smoothie maker” 🙂

Its kind of self explanatory, put fruit in with a little liquid, switch on and hey presto – instant and very fresh smoothie. Innocent – eat you heart out! Of course you can still do the soups, sauces and baby food too.

So having given it a quick wash, Brennan – youngest grandson – and I tried it out. Now I have to admit something pretty stupid here…I have a mind that kind of fixes on the wrong things and I could see that the cutters needed to go in the base of the motor, but I just couldn’t work out how to get the fruit and liquid filled beaker onto it with spilling it all out – I even went as far as wondering if i needed to turn the whole unit upside down * blush and face palm* I’m not even Blonde…

Of course you don’t do that but put fruit etc in top and screw the cutters to it and THEN  turn it upside down and add to motor. Simples really.

It works really well – but it is very noisy, so be ready.We put too much fruit in on first go and the contents wouldn’t go round, but once we took some out it worked well. The beauty is that you can make drinks out of fruits and enjoy really fresh, vitamin filled juice, and eating the fibre too, rather than a strained juice is better for you, and makes the smoothie nice and think. Add some milk instead of water and maybe protein powder and its great for when you haven’t time for food, feel unwell, or just need to get some extra calories in. With a mix of bananas, strawberries or raspberries, some milk and a scoop of vanilla ice-cream it makes a fabulous milkshake.

It has two bottles included with a kind of flip open sports drink top so you can take what you’ve made with you of keep in the fridge ready to pour. Though the plastic is quite robust I’d pour what you’ve made into a different bottle, as break both of those and you can’t use the machine unless you can buy spare tops or find one that is screw in and same size.

Stars: Five, its compact and easy to store and something I’ll use a lot especially with summer fruits. 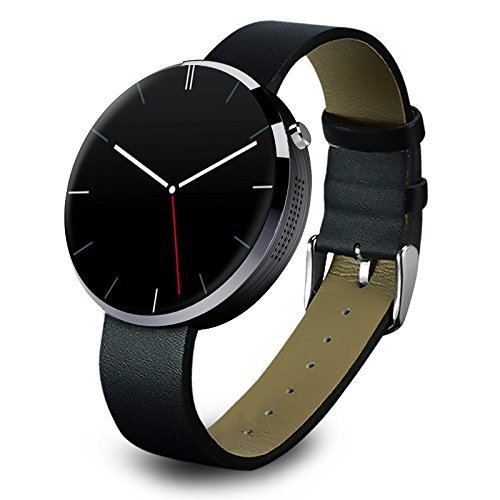 I’ve never had a smart watch – the last one for review was tested by son in law and granddaughter, so I thought I’d try this from a total novice POV.They seem to be something of a current craze – I know granddaughter (14) has her eye on one! Son number two tells me they are great for when you are driving and want to answer calls, hands free of course. His phone tends to be in his pocket or bag….

It looks attractive – I like things basic, not gimmicky and this has a classic, sleek appearance. The strap is Horween leather – Google showed me its a well known US leather company, and I found it very comfortable and well finished. Its a dark brown outside lined with a fawn inner. I have small wrists and this fitted me with 7 holes spare. Strap length from strap joining buckle to first hole is 6.25 inches and to last hole is 8.5 inches. My wrist measures 6.25 inches but to the third hole where I fastened it its actually 7 inches, the back of the watch raises it quite a bit accounting for the difference.

I tried switching it on, but nothing so I put it on charge. Usually items have some charge in them, enough to perform initial review tests but clearly not this one. Its got that magnetic charging so all I needed to do was to plus the USB into my PC and let watch connect with the magnets. There’s a green light when its connected, though that goes out quite soon.

After charging for twenty mins I tried again, got nothing at first and after playing around found I needed to hold down the switch before it would come on – maybe there was charge in it and I was not switching on correctly – that could be why the charging light doesn’t stay on. Once it came on I heard a beep noise, then a tune and the clock face. and that’s it.

I’m stuck, don’t know what to do next. A bit more playing and I accidently discovered you get more pages if you swipe screen, not tap it, nor try to use button at the side. I did warn this was the idiots guide, the total novice one!

I chose the blue tooth option, asked it to search, got my name and some random numbers but I’ve no idea what to do next. Back to home menu and open settings, open the bt option there – that brings me to the part described in the manual…but what now? To be honest it was lots of random playing, going back and forth to the home screen and somehow I connected it by accident. I intended to do a step by step write up, but it seemed to get ahead of me and I can’t be sure how I got there. I did find when it pars with my phone there’s an audible beep. Maybe if you’ve a QR reader its simpler but as a novice I’ve no idea how to do that either. My previous attempts with a camera weren’t great so I wanted to avoid that.

I wanted to look at the other functions, tried the heart rate first – after the stress of trying to connect blue tooth that ought to be high, but though the lovely red heart icon is pulsing its showing as 000 – and I Know my heart is beating 😉 Went to the instructions, tried pressing heart etc as instructed and finally got a reading of 83 bpm. Again I’m not entirely sure how I got there, but having finally set it up it seems to stay and its reading between 78 and 83 which seems about right.

Tried the pedometer – I’ve used these on stopwatch gadgets and they actually work by arm swinging which is fine for me as I’m a wheelchair user, but of course it’s not terribly accurate ( in common with all that work via arms) as if you don’t give a fairly active swing it doesn’t register. At least it does show you’ve some activity going on and maybe wearing it and remembering to swing arms with make you try harder with exercise?  /so far I’ve stood up, swung my arms, typed this and its registered 13 steps, 10.2 metres and half a calorie used 😦  I played around with the steps and target setting and found my way round that eventually.

The calendar and time are wrong so back to instructions where it tells me that once the device is paired it will auto synchronise there – it doesn’t. After spending over an hour playing and getting more and more frustrated I’ve given up and am waiting til one of the kids round..or even the grandkids – they all know more about these devices than I do!

I love the look of this, very clean and classic, it seems very useful and I was really keen to use it but the instructions let it down. They just aren’t adequate for users such as me with limited knowledge of how to set up these things, and therefore it becomes useless and really disappointing to me. Luckily I’ve family who hopefully will show me what to do and I’ll be able to judge it more accurately but at the moment it stays at a (potentially) good but not great rating.

Stars: I’ve gone for a three.

This is quite a tough one, for me its only a 1 to 2, as the instructions are very poor and I don’t have enough knowledge to use it properly and set it up. That makes it useless to me. For someone with that knowledge though they’d probably give this a five. I’m going for three therefore. If the instructions were adequate for me to actually set it up and use it I’d be rating a five too, I really like the look of it and its a good price compared with others.

Edit, just adding this review and to my shock the watch began ringing to tell me my phone was ringing, I could see al info on screen but couldn’t work out how to answer call. it says swipe, same as my phone but it didn’t work. TBH though my phone often has that issue and it take 2 or 3 times to actually answer calls…