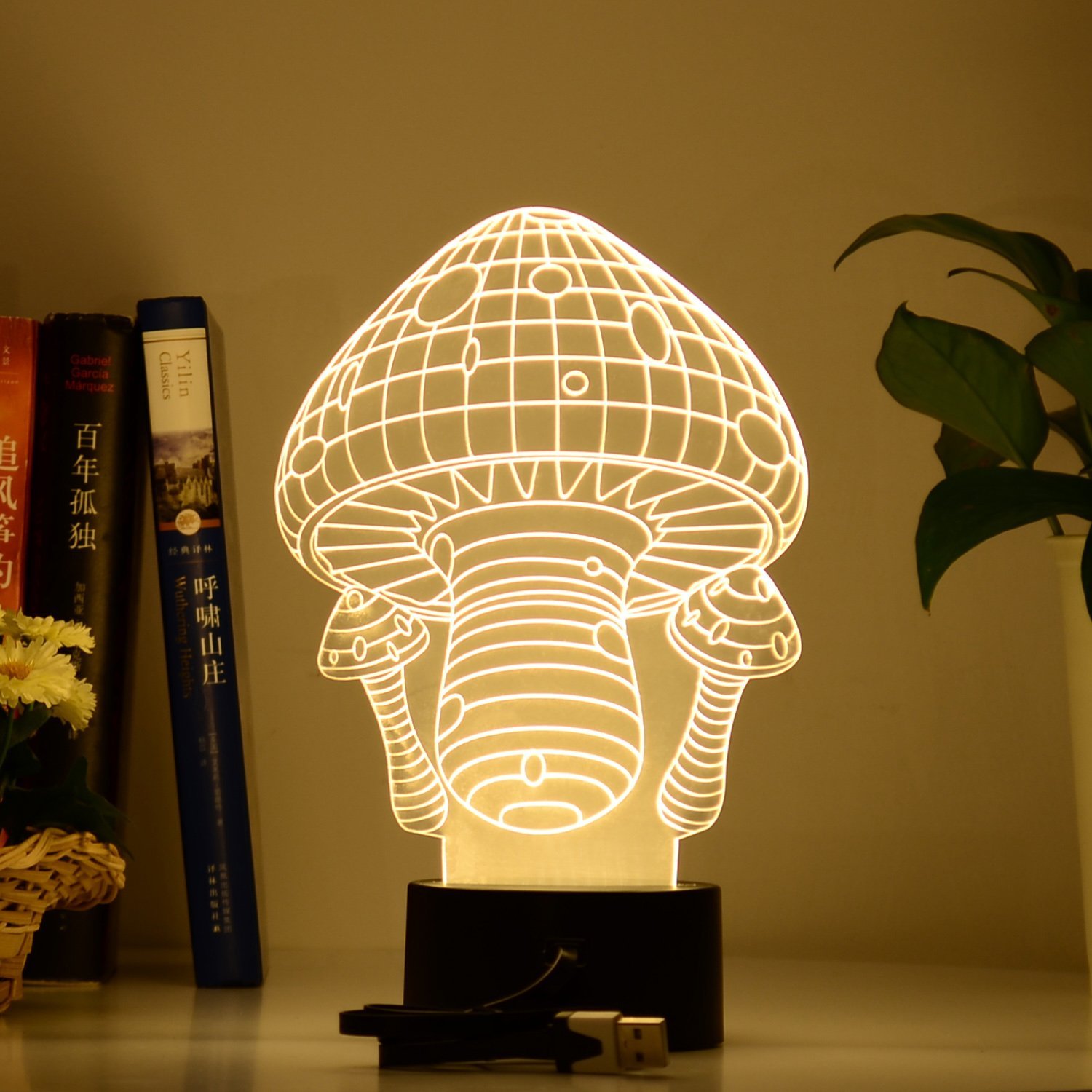 Cute little nightlight. Its powered either by USB – via PC, socket ( no adapter supplied ) or battery bank, or by 3 AAA batteries. I used my phone charger when testing, but often use battery banks when using these kind of devices, means they can be used anywhere and banks recharged later.

Its pretty simple, peel off BOTH sides of backing, slot in base, plug in and switch on. I had some issues with the on/off button, its very sensitive and I kept touching it when putting lamp into position. Once I’d realised why it kept powering off I was more careful.
I stress peel off both sides as one side is obvious but the other looks like its part of the lamp, and I didn’t realise it needed to come off. Had to scrape carefully with a knife at an end to get it to lift up then it was fine.
You can see from one of the images what its like with the backing still on…I liked it then, love it now I can actually see the lines. 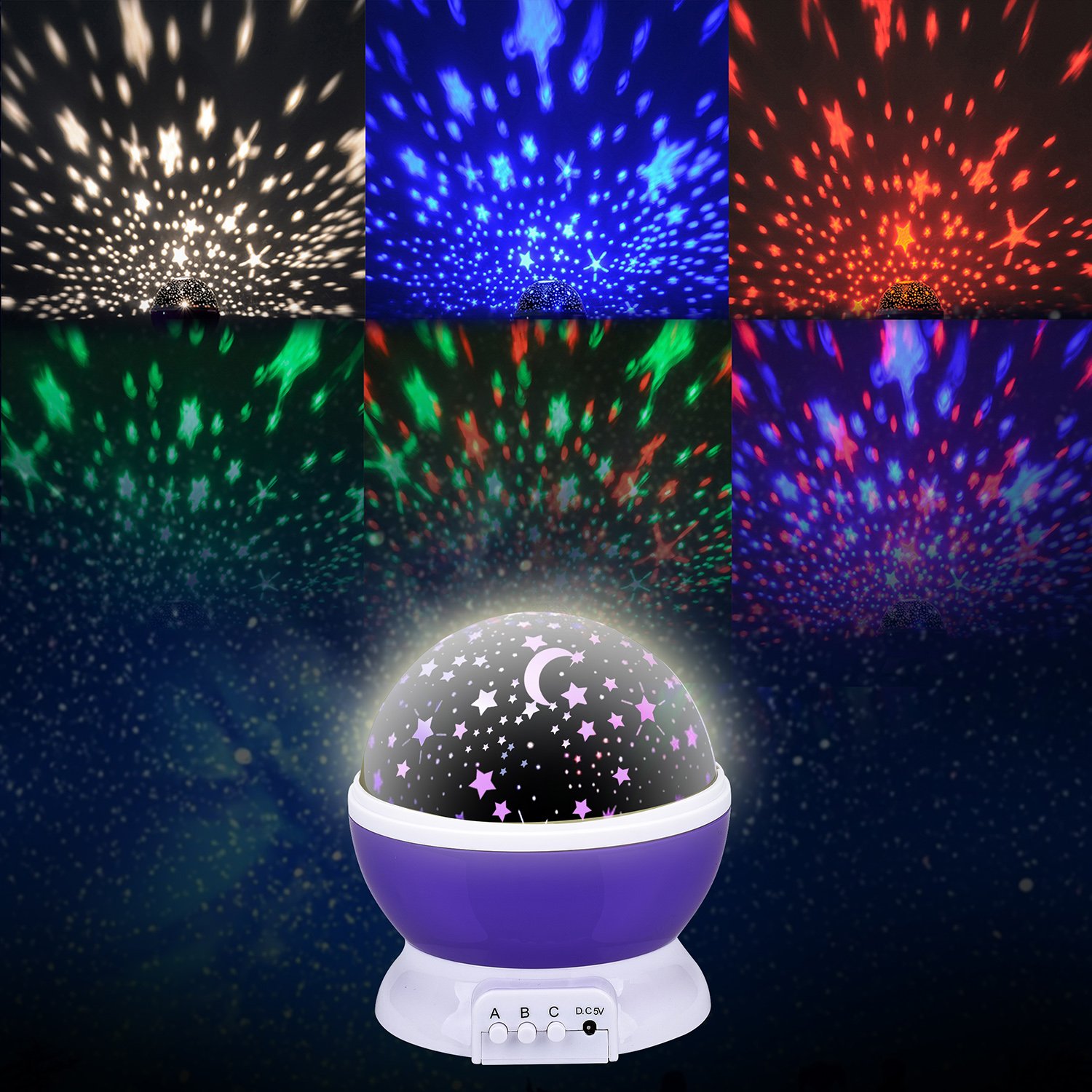 I really like this BUT it makes an awful grinding noise as it rotates, that would be incredibly irritating if left on as a nightlight, without any other sound on. Add some soft music though to drown that out and it would be fine, and of course for parties, where there’s music and conversation the noise wouldn’t be noticeable.
I have taken off a star for that noise as I think the primary sales would be as a rotating nightlight.

Its got several variations in the colour combinations, the brightness and the choice of what shapes, all based around different sized stars and quarter moons, and it was hard to decide just which I liked best. I’m usually a plain white light fan, but the blues on this really showed up well and I loved them.
You can of course just have it as an attractive static night lamp, and avoid that noise, but I did like seeing them rotate round the ceiling.
You can also place the frosted dome over and just have as a subtle night lamp.

Its powered either by USB – via PC, socket ( no adapter supplied ) or battery bank, or by 3 AAA batteries. I used my phone charger when testing, but often use battery banks when using these kind of devices, means they can be used anywhere and banks recharged later.
As with many of these devices it isn’t a mini USB cable, but one with a circular end, so don’t lose it as it won’t be as easy to replace as the USB/mini-USB ones are.
It doesn’t feel very robust, its easy to knock it and the lids flips over. The cover is very thin so you need to be careful to avoid cracking it.
There isn’t an on/off button either, needs to be unplugged to switch off, and I feel devices like these are better with a proper Off switch.

Its inexpensive though, so as always you get what you pay for, and cheap has its own costs in materials and extras. I’ve not taken off stars for the flimsiness because it does equate to the price, and with careful handling shouldn’t be a problem.
Dephen Solar Multi Colour 30 LED Rattan Ball Fairy Lights 20ft LED Patio Lighting Solar Globe Orb Lantern Christmas String Lights for Outdoor, Garden, Home, Wedding, Party Decoration 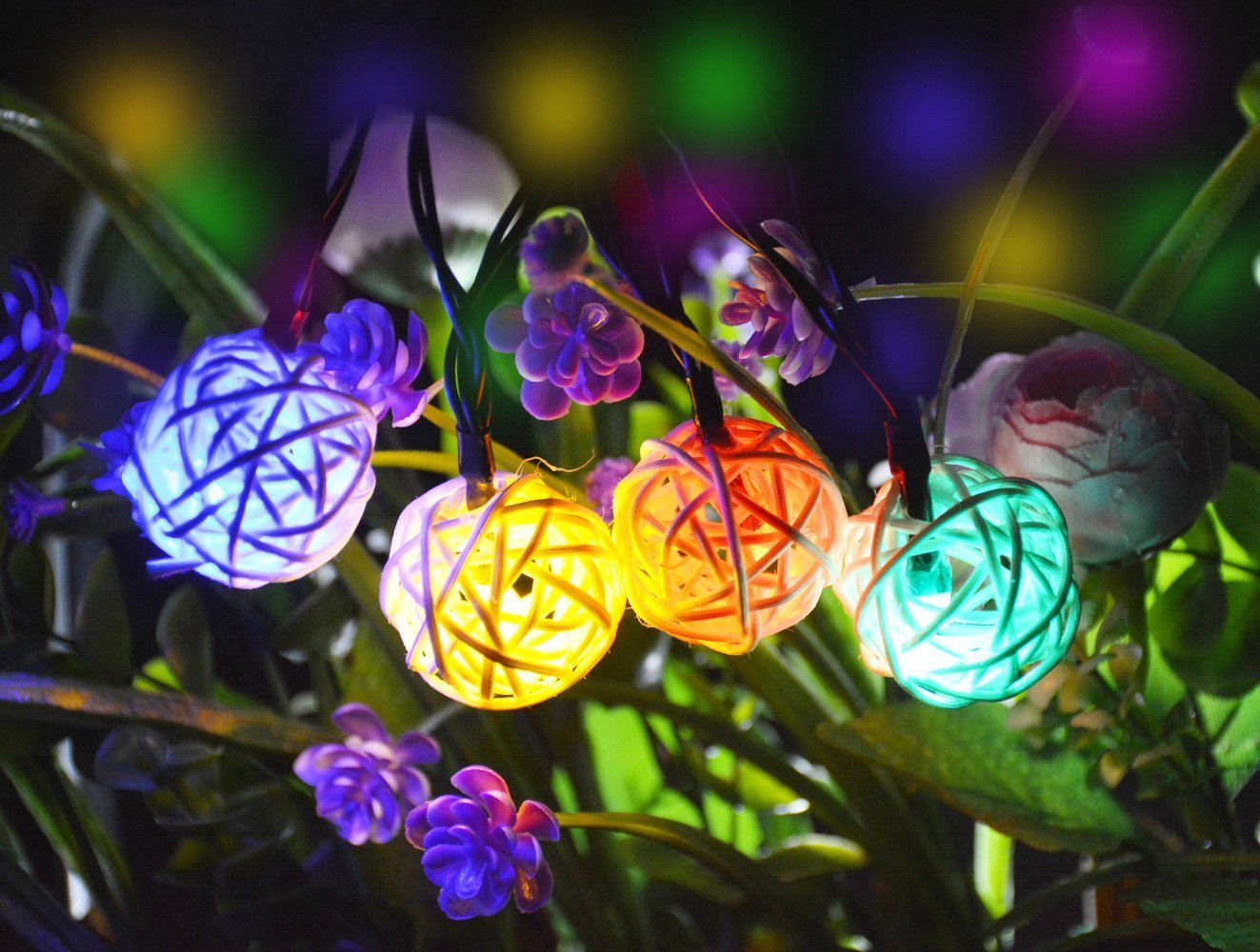 I love solar lights, got them all round the garden. I’ve currently got some coloured single solar lights in ground in front garden, been left out all year round for over two years now, six singles stuck in some large plant tubs, a pretty coloured set hung across dining room window with charger on window sill, some simple copper wire ones wound round a star shape out in front garden, and recently had four new sets. The family joke its going to look like Blackpool illuminations soon in my garden.
They’ve all been going well, I simply ensure charger best placed for sun whether inside or out and they glow well into the early hours.

These have black wire, set with lights, attached to charger/battery and a stake for placing into ground. The back has the off/on button and a mode button to change from always on to flashing.
I do find with these buttons its not easy to tell if working, and I don’t want to go trundling round the garden in the dark fiddling. What I usually do is take them under a table/into a cupboard, place something like a thick cloth against the front of the charger and they should light up, giving you a chance to see they work and to choose the mode.
You can hang the charger unit up rather than place in ground if you get the sun better that way.

This set is  30 LED  coloured lights, on a 20 ft string. That includes the  5-feet lead to charger. You don’t need as much as with electric mains ones, as it only needs to reach a sunny spot.
They have two modes, constant on or flashing. It also comes in a neutral warm white, and in a Moroccan style circular pierced tin effect, which I really like the look of – might have to buy those later 😉 These ones are inside a woven rattan ball, and the colour shows through and softly colours the rattan too.
They look really pretty, and though I usually leave my solar lights up all year round I think these might have to come in when its winter. They do say weather proof but rattan is a natural product, porous and over time I think the damp would degrade them. You could add a quick coat of varnish to help protect if you wanted – I can’t be bothered with that…. 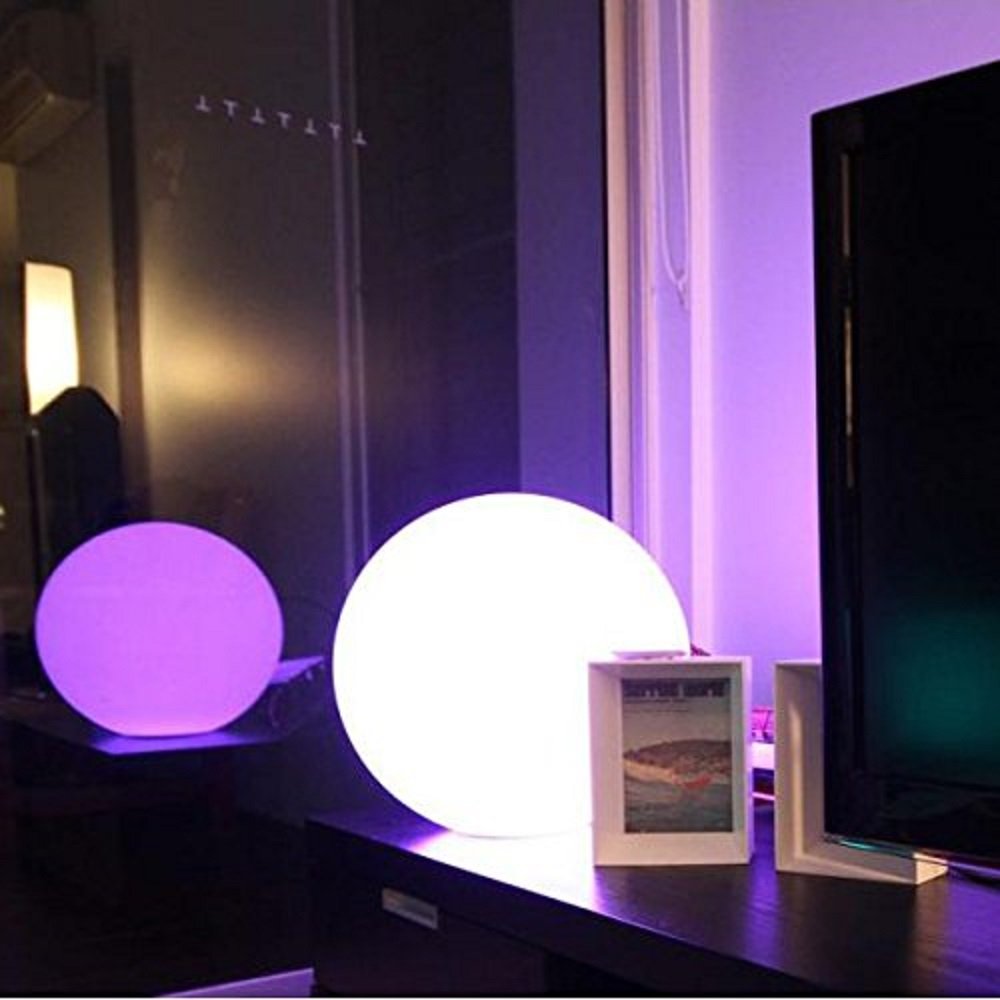 This is a fun light, reminds me very much of the seventies.
Its a soft glow lamp, perfect for a child’s room or when you want some subtle effects. Use the flashing/strobe/face effects though and its not at all relaxing! They’re so fast it feels almost headachy to watch them. Maybe if your kids are having a small party it would be fun, but not otherwise. You can set any one fo the colours, and I love the soft purple effect and the blues, as my favourites.
Son number one exclaimed “ oh, we have one of those in our bedroom, its set on red.” Cue lots of sniggering and Amsterdam Red Light jokes…He’s going to change the colour now 😉

Its powered by rechargeable batteries and sadly the charging socket is under the device, which means you can’t leave it charging whilst on to use for longer periods, as its unstable that way. (see image) Shame. Still, the sellers say it stays on for 6 hours on a full charge so would be fine without for a decent spell.
Like several items I’ve had recently the cable is USB at one end but circular at the other – lose the cable and the device is useless. With a standard USB cable at least you always have replacements, either to hand, or easy to buy.  I don’t know if one of the other cables I have that look the same actually are the same? Maybe? There’s lots of numbers etc. stamped on it but they mean nothing to me and….is it worth the risk when electricity can be a real fire hazard if wrongly used? I don’t want to risk it. I’d be so much happier if this has a standard USB cable.

There’s a couple of things that stop this being five star for me, first the socket being on the base, that makes it unstable, banced on the end of the cable, a minor issue but would have been so much better to either have some small feet on the base so cable sits under the unit and is stable, or put the socket on one side. Then the remote – its really only effective I found at a very short distance, maybe 3-4 feet. So no lying in bed and using remote to control light when its the other side of the room. Then there’s the modes, far, far too quick when the rest seems to be aimed at relaxation. The soft ball shape, subtle lights and then this glaring, harsh flickering that’s produced by using the mode effects. #notgood. Add in the cable issue and I’ve taken a star off. They’re not major points but added together show that some more thought in design could have made this so much better.

Stars: Four, a fun light but with a few minor irritations for me.