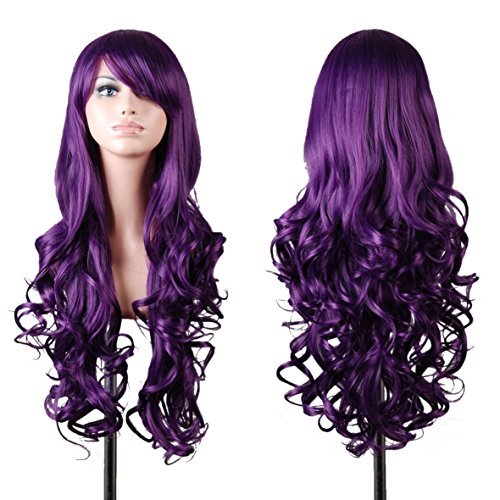 This is a fun wig, looks surprisingly good for the price. Its a thick one, mostly you can’t see the net cap through the hair, so it looks pretty realistic but you do need to position the fringe part carefully, and maybe have a couple of clips or some hairspray to hold in place.
The cap part is adjustable, and has a couple of bits that look as though they go round ears to hold it on, but we chose not do do that. If you’re wearing earrings or something you don’t want the look to be spoiled by the elastic 😉 I’d fix with a few discreet clips.

I made Daz try it on…he’s 17 and always up for some fun. It fitted him well, and looks quite luscious. ( the wig, not Daz)
It feels pretty soft, though of course not like real hair – as always you get what you pay for! This is great for Halloween parties, Xmas, nights out clubbing.

You can brush it or just run fingers through to separate the curls.
It doesn’t say but I don’t see why it can’t be washed – don’t tumble dry, a) it’ll probably melt and b) if it doesn’t melt it will assuredly get in a huge tangle of knots!
I’d use a little gentle shampoo and conditioner, to keep fresh.

Stars: Five, great fun for such a small price. 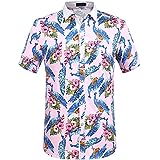 Smart summery shirt in a good quality fabric.
Its a nice and thick cotton so doesn’t look almost transparent as many do. Men don’t want to show nipples any more that we ladies do. It has a 4% Elastane mix which gives a little stretch to help comfort.
The print in on the fabric, not through, and its based around Peacocks and Flowers. The collar is plain white and the same fabric is bound down the front where buttons and holes are, and round the edge of the short sleeves. That helps keep the shape well.
The buttons are a pretty gilt edge pearly colour. Stitching throughout is excellent and this fees like a very good quality shirt.
It comes in S M and L, and I have the size L. I measured the chest and hip area, both come out at 42 inches. Darren is wearing it, he’s 17, about 5ft 11 tall and weighs around 11.5 stone
It can be machine washed, always useful. Life’s too short for hand washing… 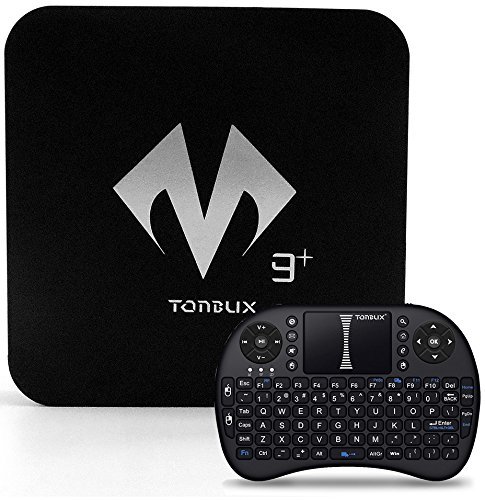 Being useless at Tech stuff my eldest grandson (17) tested this. These are his thoughts on the product.

This TV box came in decent packaging, everything was wrapped up and had its place within the box.
My initial thoughts on the box was damn, it does 4K resolution which to me is like what?? but I could not test that because my TVs and pc monitors only do full HD.
The wireless remote that comes with it in a different box in a small cardboard box,and the remote itself looks rather stylish as it has everything on home buttons, and that and touch pad.

Setting up the box required a lot less effort that what I thought it would, as I thought that you would have to create an account and set time restrictions ect, but i didn’t, all you do is plug it in a turn in on and it sets itself up. Admittedly the date and time was wrong but that was fairly easy to change.
Setting up the box took about two minutes as all you need to do is use the wires given to you, that is a power connector and a hdmi cable. Its a small hdmi cable but it works, and then to allow you to go on the internet or play store you need to plug an Ethernet cable in.
Next thing i needed to do was set the wireless remote up that was given separately. This took the most time because i was running around the house looking for the batteries and i found a 40 pack in the kitchen, so i used a few of them.
One thing that surprised me with this remote is that you can use batteries to power it, but you don’t need them as it has like a phone battery in it that you can charge and use, but anyway i put the batteries in turned it on and put the wireless adaptor in the tv box. This adaptor is located in the remote in the back where the batteries go and is a tiny usb.

I connected the TV box to a 32″ full hd TV, and also used it on an acer 24″ pc screen, and then proceeded to play around.
The box comes with a ton of apps like Netflix and an option to add more apps from the app store, and it also has a browser and a screenshot button.
I myself do not have Netflix but i went on the Play/App Store and got YouTube and it works, then i went into the settings and set the time and also calibrated the screen, as when the box did it by itself the screen had boon zoomed in ( Jeannie: this could be a typo – I’ve no idea what he means here, been zoomed in maybe?). I changed it so the edge of the screen was barely visible, and then watched a lot of YouTube, and took some screenshots of some motorbikes.
Using the wireless keyboard controller took a while to get used to, because the keyboard’s small, and it felt weird using a touch pad for a TV, but its fairly easy to get used to and it saved  a lot of time searching, because i would have to select the letters individually, but instead you just look at the keyboard, press the desired button and it works.
There’s a home button and a lot of other buttons which all work with the TV box

Overall I believe that it is a nice little device that I currently have on top on my Xbox in my room, and would recommend to a mate if they wanted a TV box of any sort, as this one does the trick and is fun to play around with.
Stars: Five, excellent device