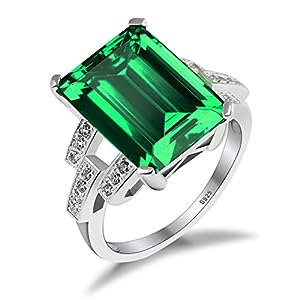 I love jewellery but real gems are so expensive so when I first  saw jewellery made of lab created emeralds I was sceptical? Surely that’s just a fancy name for some imitation type.
A web search revealed though that these are genuine emeralds, almost indistinguishable from tradition ones by all but top jewellers. Of course not only are they far cheaper, but from an ethical view far better than the damage done to the environment and the associated dangers to people of traditional mining.
There’s an excellent article online from a site called jewelrywise.com and I’ve copied this from it “They’re not gem imitations; lab-created gemstones are the real deal. They are grown in a laboratory but are identical chemically, physically and optically to natural gems.”

Emeralds have always appealed to me – they’re a traditional birthstone for these born in April,(me!) along with diamonds – maybe that’s why I have champagne tastes 🙂 but sadly only cider pockets – and sometimes just apple-juice pockets! Now though real gems are within any ones reach.

This ring is so pretty, sterling silver ring, with a huge central Emerald in a rectangular cut, with cut sides. I think its a baguette cut, but not being a jeweller I’m not sure 😉 Its got three square prongs on each side that are set with tiny cubic zirconas.  They look really pretty and its a great ring for special occasions, though a little large in practical terms for everyday wear.
It comes in a pretty rich crimson velvet pouch. 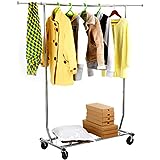 This has perfect timing, we’ve been rearranging my bedroom and I’ve always has issues reaching the hanging rail in the wardrobe, its just too high for me from the wheelchair and makes my shoulders ache

.
This was so easy to put together, took less than five minutes to assemble. Its made from what feels like a very strong metal with a chrome finish and feel like it would last many years. Some rails are so thin the bend, and then rust where the metal is damaged.

Its very sturdy, and has extensions rods to make even more space. I’ve got it tucked in my bedroom, at the lower height which suits me. We did try taking out the upper vertical rail to make it a good height for me, but it won’t lock that way and didn’t feel as stable. Stability is more important of course, so its put up the proper way!
There are holes and sliding pins to lock to adjust the height, and if you wish there are extenders that hang outside the side bars to make more hanging space, but I don’t need that. The whole thing folds flat very quickly, simply take out top bar and slot in the clips provided and then fold flat.
Its got four very sturdy wheels which make it a doddle to move, even on carpet, but they don’t have any locks which I would have liked to see. 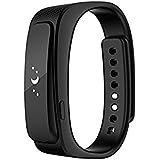 Review from Jeannie’s Reviews on wordpress.com

I’ve seen people wearing different types of these and wanted to try one, so this offer was timely.
Its smart looking, in a sleek matt black, with a glossy display, but it is quite bulky and I had – and still have – real issues doing it up. Its got two tabs that slot firmly into the holes, but doing that while its on your wrist isn’t easy. It needs to be closely attached, but as its hard to do up unless I put finger underneath for added pressure, it tends to slide on my arm…

Still, how’s it work? Haven’t a clue how it does it, but it measures various things and displays either via the smart band or your phone or similar that’s paired to it. I’m awful at IT so attempted pairing etc with trepidation but it was simple, I very quickly had it paired. As I’ve found QR codes difficult to do via camera I simply went to the app-store and downloaded the app to my phone that way. Once synched to device I can see measurements on both easily.

Steps is something I find funny, I’m a wheelchair user so I guess it works on body movement, but its great in that it does give me some idea of how active ( or not!) I am. I’m puzzled at how few calories I use even though I did just under 4K “steps” yesterday its says I used 129.59 calories…Thats not going to burn off the four squares of choclalte then! I’ve set an alarm on it so that it buzzes if I’m inactive between 7 am and 10 pm, for over 45 mins and that’s working. Hopefully it’ll give me a bit of push to do more exercise, always good.

I’ve used it as a wake up alarm too, it buzzes gently, a much better way f waking for me than any kind of music or audible devices. It monitors sleep but results seems to be a bit off at the moment, but I’m still working it all out, so that could be me having input something wrongly.
It buzzes when I’ve a call on my phone or a text which is handy if I’ve put my phone down in another room ( I know, I promised the kids I’d keep it one me at all times for safety but sometimes I put it down without thinking!)

The instructions aren’t the best, and I had some issues working out how to even switch it on, and how to charge it…It needs to be removed from the band, easy when you know how, completely lost me though. Who thinks you have to take something like this apart? Not me..but you do, just press one side of the central device and flip down the opposite on the band gently and the inside section pops out. You can then charge it via USB, and once on the usual symbols appear, and I took it from there.

The on/off switch doubles as control command, and is awful to use for me. I have to press really hard, and when you’re setting clock etc and pressing once for every hour, and then think you’ve done the long press for save and find you’ve changed the hour or mins part, its incredibly frustrating doing it all over again, and there’s no back button….
That section that comes out can be used as an earpiece too, when paired with another device. I played some music via my phone with it tucked in my ear and it was fine, but I was sitting reading, I wouldn’t feel secure with it when moving around and its just got a rubber ring that tucks in upper inner crease in ear to hold things in place.

Activity Tracker: – well its trackinga ctivity some way and the buzzer is useful reminder for me.
Sleep Monitoring: – somehwat odd results but I need to look further to see if thats my fault in programming maybe.
Loss Prevention Reminder: Very useful, also buzzes when I get a call or text.
Phone Call Reminder: See above.
Synchronize sport data: I’ve got data synched to my phoned, refreshing on phone updates t latest data but I’m not really sure how to read it all and if I’ve set it up right. Its needs some playing around with especially for an IT phobic person like me, but its a fun device with some useful features.

Stars: Four, improve the on/off button and the way to fix it on wrist and it wouyld be a five star device for me. They are minor issues but very irritating so I’ve taken a star off for them.